Helix‘s long-time and founder Brian Vollmer has noted that the Canadian band has been around for 45 years and many fans were likely not even born when the group first started. Vollmer decided to compose a poem entitled The Story of Helix (video below) which Sleaze Roxx transcribed as follows:

Five long haired guys got together in Kitchener, Ontario
They were looking for a rock n’ roll party, fortune and fame
And Helix was their name
So we hit the road
We rocked and we fought our way across the Great White North
From sea to shining sea
From Vancouver Island to Halifax
And all points in between
And a half hour later in Newfoundland
We had this guy in the band called the Doctor
He played an ES3 35 Gibson guitar
He wore the official NHL approved, NBL approved and NFL approved Peter Pan Getaway boots
He sang about a guy named Billy Oxygen who only had 14 days to fly
Fourteen days to fly

We played every shit hole, every smelly and piss puke filled rock n’ roll bar from coast to coast
Six to seven nights a week, three to five sets per night with a Saturday afternoon matinee
We ate Kraft dinner and made shit money 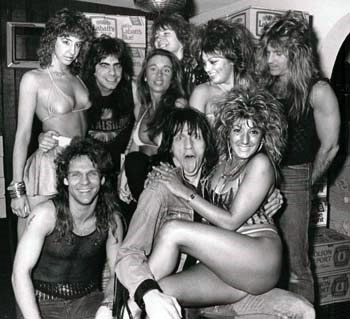 We loved it because we were rock n’ roll gypsies with fringe benefits
Sex and drugs and rock n’ roll
And then in the early ’80s
Remember the early ’80s?
Do you remember the ’80s?
Do we have any old school rockers out there tonight?
In the early ’80s, the unthinkable happened
Helix was signed to a worldwide, big money, USA record deal
And not only that, it was one of the biggest labels in the world — Capitol EMI
The same label that signed The Beatles for shit’s sake — Yeah, yeah, yeah
We had it made in the shade or so we thought
You know what EMI stands for? 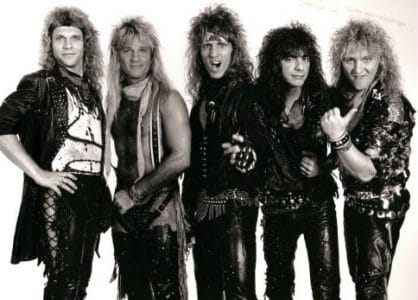 South of the 49th Parallel to the US of A
To play with a guy called Lemmy and his band Mötorhead
From there, we hopped across the pond to play in Europe
With the world’s hottest band KISS
Thirteen countries in 32 days
From Lisbon, Portugal to Helsinki, Finland
Yes ladies and gentlemen, we were living the rock n’ roll dream
We had the chicks, we had the drugs, we had the tours
We had just about every God damn thing that you could want or desire
And then along came Mr. Buzzkill — the ’90s
And the while thing went to shit
Now whereas the ’80s were pretty good to the band Helix

The ’90s — not so much
In fact, if you want to get right down to it
The ’90s fuckin’ sucked
We felt that there was this black cloud over our heads 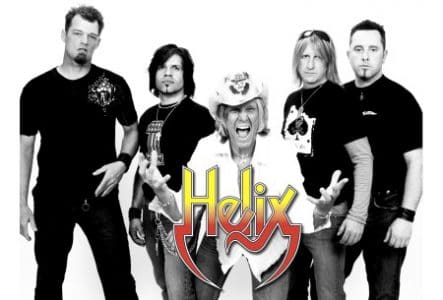 Raining down tragedy and negativity and bad vibes
The ’90s were nearly the death of Helix
But they say what doesn’t kill you only makes you stronger
And that’s what happened to us
We got stronger, we got leaner, we got meaner, we got better
And then finally, one day in 2008, fate collided with the rock n’ roll Gods and “pathew”
The original ’80s line-up of the band — Brent Doerner, Greg Hinz, Daryl Gray and myself got back together
Along with a young kid that looked like Jesus Christ
He would call himself the Duck Man
And the rock n’ roll Gods looked down and they said “It is good”

Caleb has been in the band now ten years
That’s a decade, that’s a hell of a long time 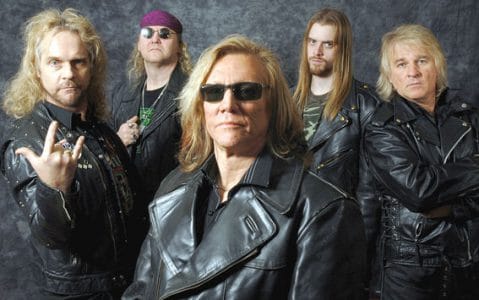 And so he’s writing his own chapter in the story of Helix so give him a hand
Nice to have you along for the ride
Back here behind me on the kit, a guy that’s been in the band since 1982
His first gig was playing the accordion in an “oompapa” band
Ladies and gentleman, would you give a warm welcome
For the original Mr. Rock n’ Roll Rocktoberfest — Greg “Fritz” Hinz
On my lefthand side, representing the Irish contingent of the band
A guy that’s been in the band since 1985
From Belfast, Northern Ireland — Mr. Daryl Gray
In 2014, the good Doctor Doerner decided to retire
He was a big part of the band so we knew, whomever we got to replace him
Would have pretty big Peter Pan Getaway boots to fill
Peter Pan Getaway boots

Ladies and gentleman, from Cambridge, Ontario — Mr. Happy, everybody’s friend
Peter Pan of the band Helix — Mr. Christopher Julke on lead guitar
My name is Brian Vollmer
I’m the only one in this bunch that’s been crazy enough to hang in there for all 45 years
People keep asking me — “Hey, when are you going to retire?”
Never!
They say “Hey man, you’re getting too old for this shit”
And I tell them, “Well, rock n’ roll is the fountain of youth and I keep getting younger every single day”
And then they suggested that maybe I should move over and let the young blood in
And I tell them, “Coulda, shoulda and woulda” [inaudible]
So don’t be square, see you around, catch you on the flip side
‘Cause there ain’t no rest for the wicked! Yeah!”

The Story of Helix as told by Brian Vollmer:

The Story of Helix Complete

2018: THE STORY OF HELIXThis is a litte poem I’ve put together as a little “Helix History Lesson.” How’s your knowledge of the band?