Helix lead vocalist and leader Brian Vollmer has released a video for the songs “Rock N Roll” and “Don’t Try To Lay No Boogie Woogie On The King Of Rock And Roll” from his new solo album Get Yer Hands Dirty. 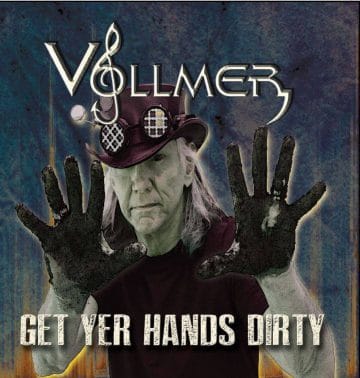 The following message was posted in part on Vollmer‘s Facebook page earlier today (with slight edits):

“It’s a medley of two songs: “Rock n’ Roll” and also “Don’t Try to Lay no Boogie Woogie on the King of Rock and Roll.”

The first song, “Rock n’ Roll”, was written by Lou Reed and the Velvet Underground, but I’ve borrowed heavily from Mitch Ryder‘s version of the song…so our version is really a version of a version. LOL. We played with Mitch Ryder in a small club in Indiana back in the 80’s. I like to tell the story of how I was taking a piss in the alley behind the club before the show and suddenly he joined me. That’s how we met…pretty funny. We didn’t shake hands! That night, while I watched him performing, he was singing so hard the muscles on his neck were protruding like two fins. It hurt my throat just to watch him. But he rocked!

The second song, “Don’t Try to Lay no Boogie Woogie on the King of Rock and Roll” was originally performed by Long John Baldry. We “nearly” played with him in the late 70’s. At that time we were playing the club circuit, and our manager William Seip had gotten us an afternoon gig at a festival in Oakville while at the same time we were playing the Queens Hotel in Seaforth, Ontario. So we had to tear down after our Friday night show in Seaforth, drive to Oakville and play, and then drive back and set up in Seaforth to play Saturday night. We arrived in the early afternoon, but while Savoy Brown was on stage a freak thunder storm hit and knocked out the power and drenched a couple thousand rock fans. But I did get a picture with Long John Baldry, so it was worth it. Interesting to note is that Cheryl Lescom, who sang throughout Get Yer Hands Dirty used to sing in Long John Baldry‘s band.”

Brian Vollmer‘s “Rock N Roll” / “Don’t Try To Lay No Boogie Woogie On The King Of Rock And Roll” video:

Rock n Roll/Don’t Try to Lay No Boogie Woogie on the King of Rock and Rollfrom the VOLLMER album GET YER HANDS DIRTYRecorded at Noble Studios in Toronto, spr…