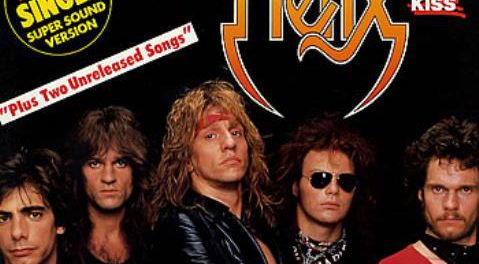 Helix look back on their videos for singles “Heavy Metal Love”, “Rock You” and “The Kids Are All Shakin'”

Canadian veteran hard rockers Helix will be premiering their new video for the title track of their new album Eat Sleep Rock via Studio 73 on Facebook on August 14, 2020 at 9:00 pm EST.

Leading up to the world premiere of the video for “Eat Sleep Rock”, Helix have been looking back at some of their past videos with frontman Brian Vollmer presumably providing the comments.

With respect to the video for the single “Heavy Metal Love” (from the No Rest For The Wicked album released in 1983), Helix‘s Facebook page indicates in part (with slight edits): 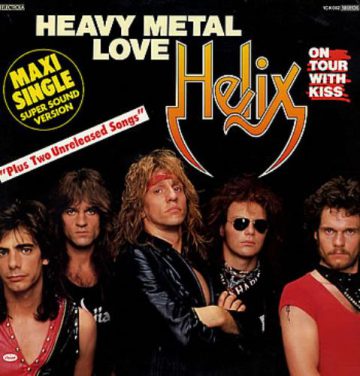 “Was the first video we ever filmed and we really didn’t know what to expect. There weren’t any such things as video shows then. In fact, it turned out to be the first year for MTV in the US. Much Music would start the next year in Canada. As a result, Heavy Metal Love went into heavy rotation in the States, something that would be impossible today. We had no idea of the huge impact of TV but we were about to find out. We were pulling into places like Washington, D.C. and there would be line-ups to get in and see the band. We were overwhelmed.

The video was shot at the Massey Ferguson plant in Toronto by director Rob Quarterly with Champagne Productions. Rob Quarterly had a great feel for how the band was to be presented. He also shot vids for Don’t Get Mad Get Even, Rock You, The Kids are all Shakin’, Wild in the Streets, Dream On, and The Storm. I wished we would have used him for more, but probably money was a detriment. This video cost $26,000 Can.

Years later when I was sitting at the AOR awards in Los Angeles with “Weird Al” Yankovic, he told me that he had used a clip from the video for his video called “The Heavy Metal Olympics”. In it was a clip from the end of Heavy Metal Love where they inverted the film and made it look like I was jumping in the air upside down.

Heavy Metal Love is a song, which, in the music business they say, “Has legs”. This means that the song isn’t just a flash in musical history. The song can be heard in the last Trailer Park Boys‘ movie and also in the upcoming CBC Egypt series Trickster, from the book Son of Trickster.”

In terms of the video for Helix‘s breakthrough single “Rock You” (from the Walkin’ The Razor’s Edge album released in 1984), the band’s Facebook page indicates in part (with slight edits): 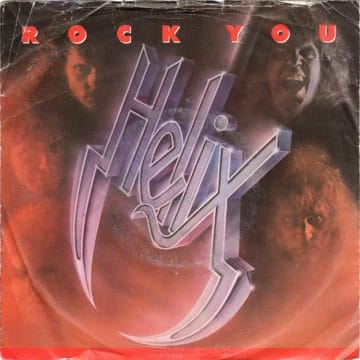 “Rock You was filmed at the Toronto Brick Yards in Toronto. Eventually we would also film The Storm there as well, only inside one of the buildings.

The Rock You video was a two day shoot. We had to wear burlap bags for clothes, including our feet, which were wrapped. It was spring and we had to stand in cold water with sharp rocks. The video was filmed by Rob Quarterly of Champagne Productions and by the end of the second day, we were running well into overtime with the film crew. At about 2:00 a.m., Quarterly announced, “That’s a wrap!”

We said, “Hold on! You haven’t done the shot with Brent Doerner underwater!”

You see, Brent had come up with the idea of coming out of the water playing guitar. Quickly Brent and our manager William Seip corralled Quarterly and demanded he do the shot we had scripted. Reluctantly he agreed, but insisted there would be only one take as the crew we were all exhausted and we had run way over budget. Brent went into the water which was freezing cold and the result is what you see on film.

By the time he finished the shot, his skin was blue and his teeth were chattering. The shot was the clincher in making the video a hit. When released, it went to heavy rotation on Much & MTV and led to major tours with Whitesnake in the U.S., our own headline show in Canada, and a Motörhead tour in Europe.”

“The Kids Are All Shakin'” video: 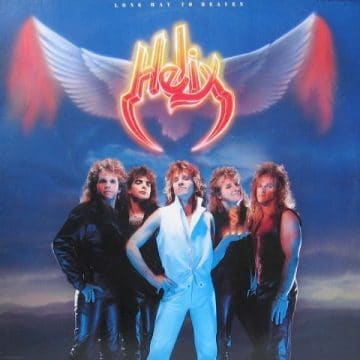 In regard to the video for “The Kids Are All Shakin'” (from the Long Way To Heaven album released in 1985), Helix‘s Facebook page states in part:

“This was the first single from the Long Way To Heaven album. The video was shot by Rob Quarterly of Champagne Productions, who had also shot the Rock You video. Rob had a great feel for what we were all about and how to translate that into film. This was one of the few productions where my daughter Jasmine attended. She was very young — about 4 years old.

In the background of a couple of the scenes are some older ladies dancing. They were laughing along with us the whole time having the time of their lives. They were great fun. We got some pics with them that were hilarious; Fritz was wearing his studded g-string with his bare ass hanging out. They must have loved that!”

Helix‘s “The Kids Are All Shakin'” video: