Helix release new single “Not My Circus, Not My Clowns” 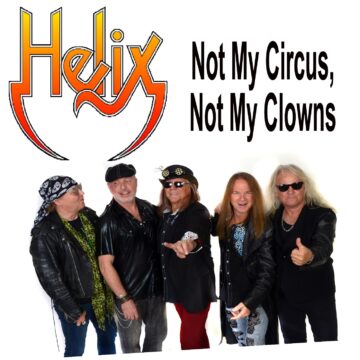 “Helix‘s “Not My Circus, Not My Clowns” digital single is released today February 11, 2022 on iTunes, Spotify, Amazon and hundreds of digital platforms worldwide.

Brian Vollmer had this to say about it “Not My Circus, Not My Clowns” sums up the Helix band’s thoughts on the Covid pandemic and all the surrounding brouhaha over the last couple of years. The band is presently working on a new album release for 2023. As well, Brian Vollmer (lead vocalist) will be releasing It’s A Pleasure Doing Business album on vinyl later this year with a couple of new tracks and some of his favorites from Helix‘s 1993  album It’s A Business Doing Pleasure. Sound confusing? Not in these times my friend – it’s the new normal!

Vollmer: “”Not My Circus, Not My Clowns” was an expression used frequently by my friend Jay Wetlaufer, who passed away several years ago from stomach cancer. Jay was a guy who had no patience for bullshit, and that’s what this song is primarily about. Although the lyrics could be applied directly to everything that’s going on today, they were actually written nearly two years ago, just as Covid was taking off. Today, we live in tepid times. People are taking sides and there is deep division in society. My favorite lines: “Those who ignore what history has shown us-well, they are doomed, doomed, doomed to repeat the past.”

Helix‘s “Not My Circus, Not My Clowns” lyric video: