Helix release new single “The Devil Is Having A Party Tonight”

Canadian veteran hard rockers Helix have released a new single entitled “The Devil Is Having A Party Tonight” which is available for purchase via CD Baby. 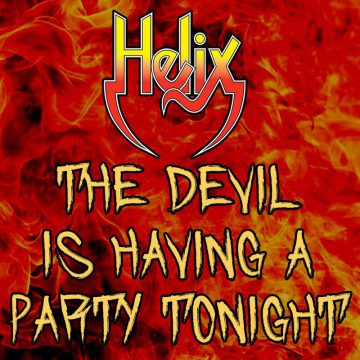 “Well, no time like the present to release the new Helix song “The Devil Is Having A Party Tonight”. I was going to release it on Canada Day (July 1st for those who are not Canadian) but Lynda pointed out to me that the long weekend might not be the best time as everyone will be away from their computers.

Anyway, you can now purchase the song as a digital download on CD Baby. Here’s the link straight to the song for purchase: http://cdbaby.com/cd/helix413

We’re asking fans to support us by picking up the new tune. I’m also working on putting together a vinyl release which should be out in a couple of months. It will have “The Devil Is Having A Party Tonight” on Side A and “The Tequilla Song” on Side B. That song I wrote with Gord Prior and Steve Georgakopoulos, who I co-wrote The Power Of Rock N Roll with. The record will be album size even though it’s really a single.

I should also mention here that Brent Doerner (former Helix guitarist and the guy who’s been doing our videos for a couple of years now) is putting together a video for the song. He already has over 60 hours into it. It should be ready by next week. At first we wanted to coordinate the release of the song with the video with the listing on CD Baby, but Kaleb suggested to me that it was actually better to have different releases on different days to help keep the profile of the song up. For instance, today we’re releasing the digital download for sale and for fans to listen to. Next week will be the video. Some time over the next month we’ll be releasing the ‘Tequilla Song” as well, and then around September the vinyl should hit. I find it all exciting (no shit) even after all these years. I think the Helix catalogue is now around 160 songs.

The song “The Devil Is Having A Party Tonight” stays in the tradition of past Helix tracks which I describe as “heavy metal pop.” From as early as 1983, we’ve been writing heavy songs but with sing along choruses. I think our “direction” was determined by those years of playing the Canadian bar circuit, where you had to be a travelling Top 40 jukebox to survive…But Helix always liked and played the heavier stuff like Aerosmith, Ted Nugent, and Ritchie Blackmore’s Rainbow. So instead of playing “Taking Care Of Business” and “Some Kind of Wonderful” we were playing stuff like “Dog Eat Dog” and “Cat Scratch Fever.” While it doesn’t seem too radical now, back in the late 70’s, we were about the only band on the circuit playing these kind of tunes.”