For many people, the name Jim Lawson will not ring a bell but for Helix fans, he is one of the many musicians that did a ring of duty so to speak in Helix after 1989 and until 2006 when the line-up stabilized.

Wikipedia indicates that Lawson was in Helix from 2004 to August 2009. Lawson is listed a “live band” member during the time that Helix released Rockin’ In My Outer Space (2004), the Get Up! EP (2006) and The Power Of Rock And Roll (2007) and not credited as playing on any of those albums. 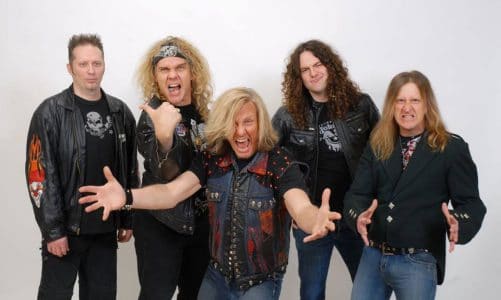 This was a short lived line-up which acted as a stepping stone to the present line-up in Helix today. From left to right is: Rob McEachern/drums, Brent Doerner/guitar, myself, Sean Kelly/bass, and Jim Lawson/guitar. It was soon after this that Sean left the band to play guitar for Nelly Furtado (we remained writing partners). Once Sean departed the band it seemed only natural to get the original 80’s line-up back together, seeing as Brent was back in the band for the first time in many years. With Fritz & Daryl back in the band the only person that hadn’t been in the 80’s line-up was Jim Lawson, who, by this time, had been in the band about 7 years.

Brent and Jim got along like oil and water. The breaking point came when Jim tried to tell Brent he was playing the wrong notes in one of the solos. This was because previously Jim had done the lead as he had learned it from the record. Brent replied, “I wrote those leads for f**ks sake!” LOL. The relationship went downhill from there and eventually Jim was replaced by Kaleb, who was hand picked by Brent.

In 2014, Brent retired from the music biz. We knew that whoever replaced him was going to have “pretty big Peter Pan Getaway Boots to fill.”. Enter Chris Julke and today’s present day Helix line-up.”