Helix frontman Brian Vollmer continues to voice his opinions on the music industry and how it can improve. Helix have not played a concert in the United States of America since seemingly their gig at Ribfest in Sioux Falls, South Dakota, USA on May 29, 2014 apparently due mainly to the high cost (and hassle) for a Canadian band to cross the border to play a show in the States. Vollmer has now just voiced his rather interesting opinions about bands playing for money “under the table” (i.e. not declaring it to the government) and without any contracts. 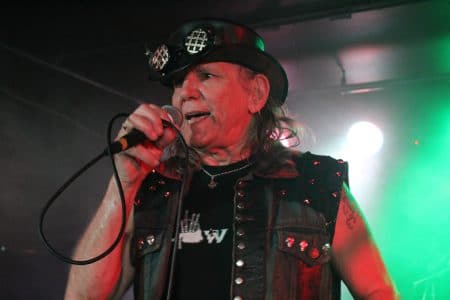 “I want to talk about something that both the government and the Musician’s Union don’t talk about-contracts and enforcing the G.S.T./H.S.T. rules.

Every musician that has ever played in a weekend band knows that if your ask for a contract from the club chances are the club owner will tell you to go pound salt up your ass. Why? Mostly because the club doesn’t want to be on the hook for the G.S.T./H.S.T. or legally responsible if they decide to rip off the band. If you complain to the Musician’s Union, they’ll lecture you that you should have demanded a contract. But if you demand a contract they won’t hire you…So, round and round we go. What bands do is just suck it up and hope for the best. Most of the time it does. However, legally the musician, if he/she has an H.S.T. number is responsible for the H.S.T. If the musician reports the offending bar owner, word gets out and pretty soon no one will hire you.

So where the is the Musician’s Union in all this? There used to be a time when they would stand up for working musicians. Today they just sit on their asses and do sweet f**k all. It’s no wonder musicians don’t want to join this useless organization. As for the government they’d rather dole out millions of dollars in grants/loans to artists that are either too lazy to sell their music, can’t sell their music ‘cos it sucks, or can sell their music but take the money ‘cos it’s there. Here’s an idea: Instead of continually hammering bars with regulations & taxes, why don’t they give some of this money to bar owners and enforce the tax laws so bands can make a decent wage? Too complicated?

Hey, it’s not brain surgery! If the government or the union wanted to really know who was issuing contracts and who wasn’t, all they would have to do is go to the club and ask. Obviously if a club is running bands every weekend there should be some sort of paper trail, shouldn’t there? Why isn’t the Musician’s Union DEMANDING it? Why isn’t the government asking? They know 99% of weekend musicians never declare this income but choose to look the other way. Why?