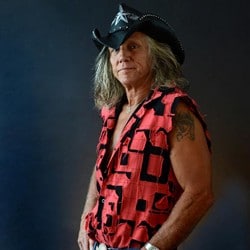 Helix frontman Brian Vollmer will debut his new solo band on November 27th in Toronto, with an album to follow.

“As most Helix fans know, I’ve taken the Helix electric show out of the Ontario bars,” said Vollmer. “The main reason for this was that it was distorting the price of the band for summer festivals. My new solo project, simply called Brian Vollmer, will be playing our first gig November 27th at the Rockpile 2, which is the old Knob Hill Hotel. Our set will be comprised of Helix songs and a few covers. In the band with me are Brian Doerner (drums/vocals) and John Claus (guitar/piano/vocals). I’ll also be putting together a CD of originals and covers to be released in the New Year.”

‘Metal On Ice’ is an upcoming book that focuses on tales from Canada’s hard rock and heavy metal heroes, due for release in September through Dundurn Press. The book’s author Sean Kelly, frontman of his own band Crash Kelly, has decided to release an accompanying music EP that will bring together the voices from ‘Metal On Ice’ in the way you like to hear them best — the songs you love re-envisioned by the original artists. The EP’s track listing includes “On The Road To Rock” by Nicholas Walsh and Kick Axe’s Victor Langen, “Heavy Metal Love” by Brian Vollmer, “Metal Queen” by Lee Aaron, “Don’t It Make You Feel” by Darby Mills, “Keep The Spirit Alive” by Russ Dwarf and “Hey Operator” by Carl Dixon.

A fundraising campaign has been set up at www.pledgemusic.com/projects/metalonice in order to raise money to complete the EP.