Helix working on new website with video footage of the band 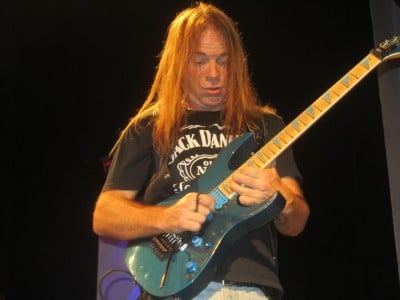 Earlier today, a new post on the Facebook page belonging to Helix‘s long-time frontman Brian Vollmer states: “Well, it’s back to working on the new Helix website. As I’ve mentioned before, this time around I’m going to be putting in a lot of my footage from over the years in the biography section, which will be divided into sections according to the albums released with a beginning section of clips from the earliest days of the band when we were playing the circuit across Canada with short journeys into the U.S., primarily in New York State and Texas (on the Breaking Loose & White Lace albums).”

Helix, of course, are best known for their 1984 hit “Rock You” but have maintained themselves over the years releasing new studio albums periodically including Vagabond Bones (2009) and Bastard of the Blues (2014).  The band is still touring on a consistent basis. Playing on the main stage this year at the Monsters of Rock cruise, Helix continues to be at the forefront of the Canadian hard rock scene.

Sleaze Roxx stated the following in its review of Helix‘s last studio album Bastard Of The Blues: “By no means perfect, Bastard Of The Blues does prove there is lots of gas left in the Helix tank. The album has far more in common with Vagabond Bones than it does with the band’s most memorable releases or the best forgotten early 2000’s era. The thing about Helix is that no matter what you think of their studio releases — and after 35 years you should know by now if you enjoy the band or not — they always deliver live, and I’m sure Vollmer and company will turn some of these tracks into hard hitting staples when they step onto a stage in a rundown bar.”