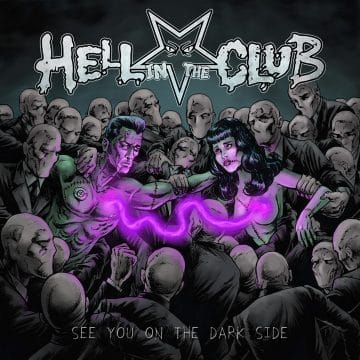 Italian rockers Hell In The Club have released a new track titled “The Phantom Punch” from their upcoming fourth studio album See You On The Dark Side, which will be released via Frontiers Music Srl on September 15, 2017.

Hell In The Club‘s last studio album Shadow Of The Monster finished at #18 on the Sleaze Roxx’s Top Ten Albums of 2016 and Sleaze Roxx stated: “Hell In The Club have the impressive distinction of having all three of their albums figure on the Sleaze Roxx readers’ year end lists. The Italian rockers’ debut album Let The Games Begin ended at up #17 in 2011 while their sophomore album Devil On My Shoulder finished at #14 in 2014. Hell In The Club didn’t reinvent the wheel with Shadow Of The Monster and that is likely the reason that the group is rewarded with a third straight album on the Sleaze Roxx readers’ year end list. At this point, it appears that Hell In The Club are regular mainstays on the year end list so it will be interesting to see if they can crack the top 10 next time around. Whatever the case, there are only a few bands like Steel Panther, Airbourne and Reckless Love that have achieved the aforementioned distinction so Hell In the Club are in good company.”

Hell In The Club‘s “The Phantom Punch” song:

Hell In The Club – “The Phantom Punch” (Official Audio)