Italian sleaze rockers Hell In The Club consisting of led vocalist Dave, bassist Andy, guitarist Picco and drummer Mark have unveiled their cover of Alice Cooper‘s classic track “He’s Back (The Man Behind The Mask).” 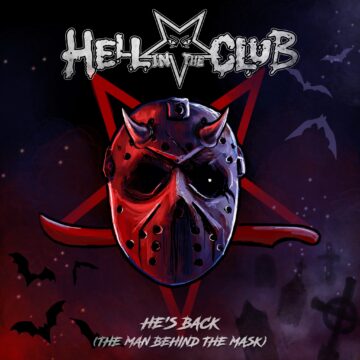 “Italy’s Hell in the Club, in celebration of Halloween, have released a cover of the ’80s Alice Cooper classic ‘He’s Back (The Man Behind The Mask)’! Listen to the single on your preferred streaming service here: https://orcd.co/hitc

‘He’s Back (The Man Behind The Mask)’ appears on Alice Cooper‘s 1986 release, “Constrictor” and was also on the soundtrack for the Friday the 13th Part VI: Jason Lives movie. The band couldn’t resist releasing this cover for Halloween because of that fun horror movie trivia aspect of it….and of course because they love the song!

Hell In The Club is an Italian hard rock/heavy metal band featuring members of Elvenking and Secret Sphere. The band has released five albums and is currently celebrating 10 years as a band after the release of their debut album “Let The Games Begin” in 2011. With Dave on vocals, Andy on bass, Fede on drums and Picco on the guitar, Hell In The Club will delight you, they’ll make you dance, sing, and bang your heads with their songs. They mix classic hard rock and modern sounds, heavy metal and party songs, fifties rock’n’roll, and anything in between. Rock ‘n roll is all about fun and that is what has been on display throughout their musical career.”

Hell In The Club‘s “He’s Back (The Man Behind The Mask)” single: