Canadian rockers Hellbros have released a video for their new single “Feed It.” 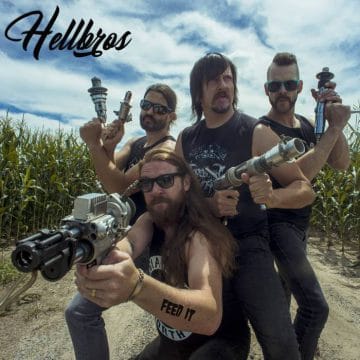 Sleaze Roxx stated the following in its review of Hellbros‘ last album Calling All Giants: “With their new EP Calling All Giants, Canadian rockers, Hellbros, have followed up their 2011 album Goodtime Machine with a gloomier feeling and more consistent effort. Gone are the recklessness and wild fury of songs such as “Street Party” and in are heavier mean songs that still really rock but in a darker type way.

For some reason, Calling All Giants reminds me a lot of Newsted‘s Metal and Heavy Metal Music records with the gruff vocals from Hellbros frontman Peter Jurt having a lot of similarities to Jason Newsted‘s own rough and gruff vocal delivery, and the heavy and dark but enjoyable music on each record. If anything, Hellbros fill a nice void with Calling All Giants since Jason Newsted has sadly disappeared off the face of the earth or rather just the public eye since in or about September 15, 2014.