Hellectrokuters back in the studio working on a new album

French rockers Hellectrokuters have been back in the studio working on a new album during the month of April 2016. 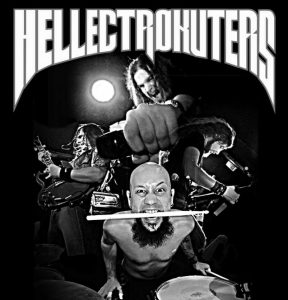 Back in February 2012, Hellectrokuters released the album Rock N Roll Beggars, which received a rave review from Sleaze Roxx, which stated: “Judging by lyrics such as “Let’s get high ’till we die”, it appears as if the Hellectrokuters are hell-bent on burning out in a short period of time. If that is in fact the case, the French foursome’s debut album Rock N Roll Beggars is one deliciously decadent legacy to leave behind. I’ve been spinning this album for a couple of weeks now, and no matter how hard I try to unearth a flaw, there isn’t one appearing. The Hellectrokuters have nailed it — perfectly capturing the essence of dirty ’80s hard rock and the fury of more modern rockers. This is the sound of old-school bashing heads with young punks who think they know everything about hard rock because they watched some special on VH1. This is the unbridled energy of Airbourne slamming recklessly into Joe LeSte‘s failed Beautiful Creatures project. This is… damn near perfect!”

Not surprisingly, Rock N Roll Beggars finished 2012 with a #2 spot on Sleaze Roxx’s Top Ten Albums of 2012. Sleaze Roxx stated in that regard: “From out of nowhere, and with little fanfare, the Hellectrokuters burst onto the scene in 2012 with a head-banging debut album. With a sound that crossed the line between Airbourne and Lynch Mob on a crystal meth binge, these French rockers screamed their way through ten deliciously hard-driving numbers. The fire and rage the band played with made it appear as if they knew their career would end abruptly, so they had to lay all their cards on the table during ‘Rock N Roll Beggars’. As it turns out, that might not be so far from the truth — as they are currently searching for a vocalist and bassist.”