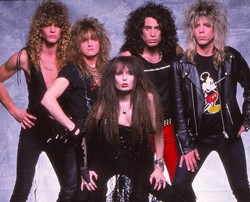 Hellion has announced a contest to name the title of of their upcoming anthology CD, which is scheduled for release this summer. The anthology will include fan favorites from all of Hellion’s albums.

People desiring to enter the contest can send their suggestions to newrenaissance@yahoo.com. The deadline for submissions is March 15, 2013. The winner of the contest will receive his or her name on the album’s credits as well as a collection of Hellion’s new line of merchandise.

In 1982 Hellion became the first American metal act with a female singer, Ann Boleyn, to achieve international acclaim. Throughout the last three decades, Hellion has shared stages throughout the world with acts such as Slayer, Dio, Exodus, Whitesnake, and many more. Hellion was also the first American metal band to to tour in the former Soviet Union (now Russia) and were the first female-fronted metal act to gain airplay on MTV and VH1.