Helloween release animated video for single “Out For The Glory”

German power metal rockers Helloween consisting of lead vocalists Andi Deris and Michael Kiske; guitarists Michael Weikath, Kai Hansen and Sascha Gerstner; bassist Markus Grosskopf and drummer Dani Löble have released an animated video for the opening track “Out For the Glory” from their new self-titled studio album, which has been available via 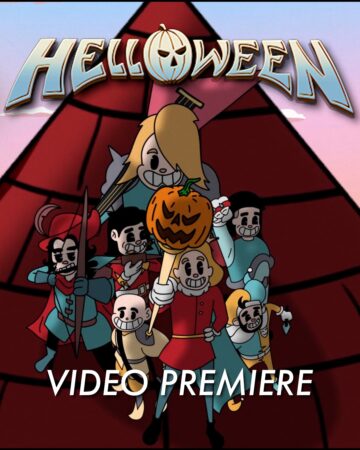 Nuclear Blast Records since June 18, 2021. The video for “Out For The Glory” premiered on December 17, 2021. In the last month, the group has also unveiled lyric videos for the tracks “Robot king” and “Cyanide.”

Sleaze Roxx stated the following in its review of Helloween and the three aforementioned tracks:

“Helloween opens with the faster paced “Out For The Glory” which will easily take you back to the Keeper of The Seven Keys albums with Kiske‘s soaring and high pitched vocals. This is the type of track that I expected to hear from Helloween with their bolstered or “reunited” line-up. It’s simply a great song. Perhaps the reason why it hasn’t been chosen as a single thus far is because it seems to only showcase Kiske on lead vocals….

“Robot King” is one of the faster paced tracks on Helloween and fits in well on the album. I could see this song fitting in quite well in the band’s live set although the higher pitched notes at times could be tough to duplicate live.

“Cyanide” is another solid track where Deris gets his chance to sign and show his versatility singing wise. It’s actually one of my favorite songs on the record, in part because it was kept on the simpler side and it has some nice melodies (aside from the blander chorus section).”

Helloween‘s “Out For The Glory” video: