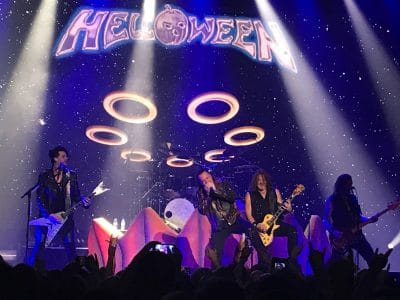 Sleaze Roxx attended Helloween‘s tour stop at MTelus in Montreal, Quebec, Canada back on September 12, 2018 and stated in its concert review:

“The setlist from Helloween on this night was simply out of this world. The Keeper albums were very well represented. You had some the best songs from the Deris led material and you even had a healthy blast from the past with the Walls Of Jericho album being quite well represented. After awesome renditions of “March Of Time” featuring Kiske on lead vocals and “Perfect Gentleman” featuring Deris singing, it was time for Kai Hansen to take center stage and bring everyone back to “some good old ’80s heavy metal from Hamburg, Germany.” Hansen is definitely not in the same league in terms of singing as Kiske or Deris but it was fun hearing him sing those early Helloween tracks including a fun medley of “Starlight,” “Ride The Sky” and “Judas” followed by “Heavy Metal (Is The Law).” Although The Meister and I were about 30 rows of people back from the stage, everyone around us seemed really into the show and tons of people knew all the lyrics to the older Helloween songs.”

It’s been over 14 months since we started the „Pumpkins United World Tour”. It was a blast to see all these beautiful pumpkin heads around the globe!We’re ho…