Sleaze Roxx stated the following in its review of Helloween‘s single “Pumpkins United” which was the band’s first new track to feature both lead vocalists Andi Deris and Michael Kiske:

“Now, Sleaze Roxx usually does not review singles but I have made an exception here because the “Pumpkins United” track has all of the elements of a classic Helloween track all rolled into one. Obviously, with such a strong song right off the bat from the 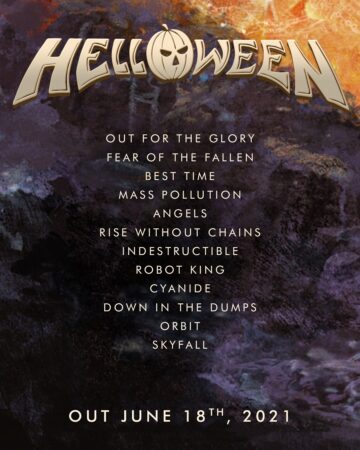 Helloween reunion with Kiske and Hansen, one can only dream of just how good a full album would be from all those guys. One of the reasons that I am reviewing the Pumpkins United CD is also to point out that certain Helloween band members were willing and able to put aside their egos and petty disagreements from decades past (I am talking mainly of guitarist Michael Weikath and singer Michael Kiske who did not speak to each other for about two decades following the latter’s departure from the band) to give the fans what they really wanted.

The success of the Pumpkins United World Tour 2017-18 speaks volumes on how the fans have loved the Helloween reunion with Kiske and Hansen. Both of them had to put their egos aside since Helloween kept the potential band members that would be the most affected by the duo’s reintegration into the group. Kudos have to go out to singer Andi Deris along with guitarists Michael Weikath and Sascha Gerstner who had to share a good chunk of their limelight in the band to make things work with Kiske and Hansen. Helloween‘s “Pumpkins United” single is the wonderful output of an incredible and fascinating story of key past and present band members uniting to give the fans what they likely never thought could be possible.”