U.K. hard rockers Hell’s Addiction have released a video for their new single “We’re On The Road Again.” 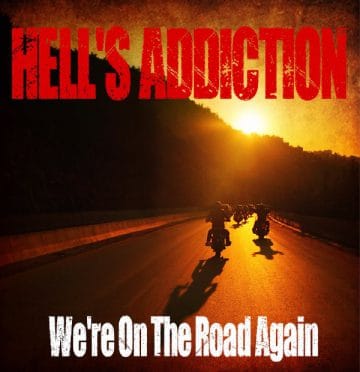 “Hell’s Addiction have announced the release of a new single & video – We’re On The Road Again – available to download and stream on Friday 24th Nov 2017.

A 5-piece balls-out hard rock band from Leicester UK, Hell’s Addiction are described as the bastard child of an illicit three-way between Skid Row, early-Guns N’ Roses & AC/DC and the new single typifies that description.

We’re On The Road Again, is available from all good digital download outlets and streaming services. It is the first song to be taken from a brand new EP slated for release in Feb 2018 and was recorded at Axis Studios and engineered and mixed by Matt Ellis.

The video was recorded at a sold-out home town show in Leicester.

Frontman, Ben Sargent said: “This song sums us up. We exist solely to perform live and rock an audience to its bones. It’s who we are, it’s in our DNA. Sure, we love recording but only because it enables us to tour and party with the crowd. We love it loud and we plan to only make it louder.

He continued, “We can’t wait for folks to hear our new material. It’s the first stuff we have recorded with guitarist Dan Weir and he brings a commerciality to our sound; he brings a polish to our rough diamond – Ha!!