Hell’s Addiction release video for song “The Way I Feel”

After warning back in March 2018 that the band was close to breaking up, UK rockers Hell’s Addiction are back with a new video for their song “The Way I Feel” from their upcoming EP to be released later this year. 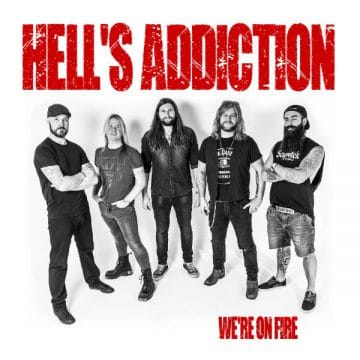 Their last single, ‘We’re On The Road Again’ was named Classic Rock Magazine’s Track Of The Week and reached No 1 on HRH Radio, as well as airplay across the world.

They now release a video for ‘The Way I Feel’. It is the third song to be released from a brand new EP slated for release later in 2018 and was recorded at Axis Studios and engineered and mixed by Matt Ellis.

Bassist, Jason Green said: “As a band this song is by far the one we are most excited about! It was written nearly a year ago and we’ve played it live quite a few times but the realisation of how far we had come as band was when we recorded it at Axis Studios. When we heard it back for the first time, it was just WOW!

We have gone the extra mile with the video and have to thank Jay Hillier for providing us with a video to be proud of! As the saying goes, we have definitely saved the best till last.

The single will be available for download and streaming later in June and to keep you going until then here is the video! ENJOY!!”