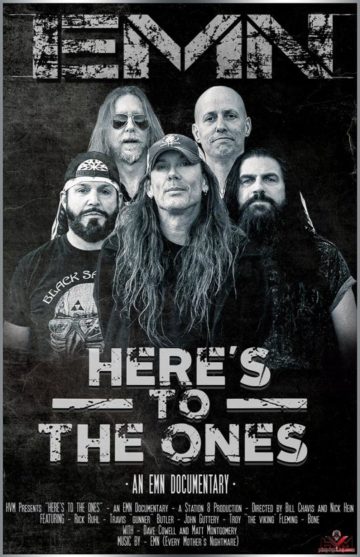 The Facebook Event page for the live stream indicates:

“BraveWords’ new online experience, Streaming For Vengeance, continues with Here’s To The Ones – an Every Mother’s Nightmare documentary, and band Q&A, broadcasting live on Saturday, September 27th at 3:33 PM Eastern. Live stream at http://facebook.com/bravewords“

EMN (Every Mother’s Nightmare) is set to release a new album this fall via their label HighVolMusic. In addition to the new album, a documentary was also filmed during the recording of the album.

‘Here’s To The Ones’ is a look at the behind the scene recording process with an in-depth discussion about the album as well as conversation about EMN the band today.

Prior to the pandemic, EMN began recording their album at Supernova Sound Memphis with producer Dave Cowell and Matt Montgomery. During the recording sessions, the idea of filming a documentary was formulated by label president Bill Chavis.

Bill Chavis explains: “The pandemic proved to be challenging but it also proved to be rewarding in that it gave us the additional time needed to not only complete the album but also film the documentary. I flew down to Memphis, Tennessee ahead of the pandemic in March for a scheduled meeting with the band but also to preview the new material.  I had been toying with the idea of an EMN documentary for some time. When I talked with Dave Cowell and Matt Montgomery about my idea, they were more than accommodating in allowing us to take over the studio. I hired a film crew and it all just came together like it was meant to happen.”

Coming this fall, ‘Here’s To The Ones’ is directed by Nick Hein (Station 8 Productions) and Bill Chavis. Album release details plus the new video-single are scheduled for September 18th.”