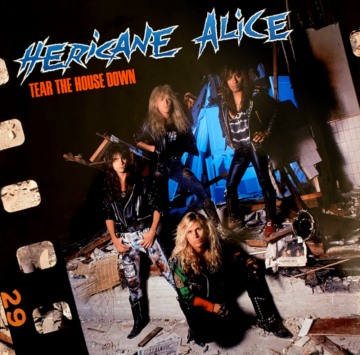 “Featuring Jackie Ramos and Ian Mayo (Bangalore Choir, Bad Moon Rising), Hericane Alice was your typical hair-metal band that put the fun back into hard rock. But like so many other bands that didn’t get a major label deal until the late ’80s, they were largely ignored by the record buying public.

Originally formed in Minneapolis, Minnesota during 1984, the first formation of Hurricane Alice comprised vocalist / guitarist Leni DiMancari with Scott Werner of Ssister Max on bass and former Counter Attack man Rusty Miller on drums. Originally David Reece, then a member of Lillian X but later of Accept and Bangalore Choir, was asked to join but declined. DiMancari, Werner and Miller relocated to Chicago with Frank Livingston and Head East’s Jeff Meyers to forge a new band unit dubbed Steele. Later removing Meyers from the formula, the group, back in Minnesota, took on the Hurricane Alice title again and Bruce Naumann of The Employers was then drafted as lead singer. The band was nominated for four Minnesota Music Awards and won the ‘Best band’ category in 1987. Early Hurricane Alice demos would include a cover of Golden Earring’s ‘Radar Love’.

As Hurricane Alice, a 1986 album had surfaced although only vocalist Bruce Naumann and Rusty James took the risk of relocating to Los Angeles. Leni DiMancari duly forged Rising Tyger with Ben Griffith on vocals, Joe Peterson on bass and the Montrose credited Steve Belino on drums. Rising Tyger recorded an album, produced by Leonard Haze of Y&T, but the record never emerged.

Hurricane Alice went on to ink a deal with Atlantic Records in 1989, but were forced to slightly alter their name to Hurricane Alice just before the release of their one and only album, ‘Tear The House Down’ produced by Thom Panunzio at A&M Studios in Hollywood, in 1990 following objections from the Enigma signed outfit Hurricane. The spelling of the new branding was in fact suggested by Fleetwood Mac’s Stevie Nicks, whom the band shared management with. A promotional video for the track ‘Wild, Young And Crazy’ was filmed and touring undertaken supporting L.A. Guns, Skid Row and Whitesnake. Hurricane Alice’s days were pretty much numbered after the record was issued in 1990. A set of pre-production demos were laid down with producer Neal Kernon but Atlantic passed on the option.

Following the band’s split, the rhythm team of bassist Ian Mayo and Jackie Ramos continued to work together, firstly in Bangalore Choir and then Bad Moon Rising. Guitarist Danny Gill eventually recorded again with Marc Ferrari in Medicine Wheel, whilst vocalist Bruce Naumann had a solo project described by one publication as: ‘rootsy, organic and semi-acoustic’. Prior to that, Naumann had, for a short period, linked up with Bobby Berg of Beggars & Thieves, Tom DeFile of Saigon Kick and Adam Wacht of Trouble Tribe but the relationship was fruitless. In 2020, to everyone’s surprise, Hericane Alice reformed and released a mini album, Gotta Be Real.

Tear The House Down is a must have. Benefiting from exemplary production, it is considered as a cornerstone of hard rock in the US.”

You can purchase Hericane Alice‘s reissued album Tear The House Down via Bad Reputation Records‘ website.