While most people will likely categorize Chicago based rockers Hessler as a “heavy metal” band, the group’s frontman Igz Kincaid recently starred in a commercial for retail giant Kmart where he shows a softer side that he has yet to display while in Hessler. 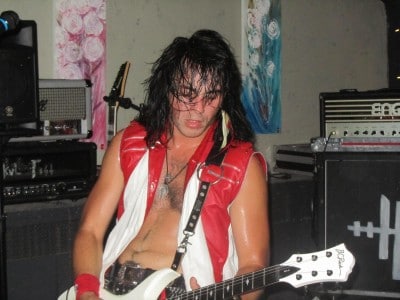 Hessler‘s last EP Ghost Dance landed the number three spot on Sleaze Roxx’s Top Ten Albums of 2014. Sleaze Roxx stated at that time: “Earlier in the year, the Chicago based band released the stellar EP Ghost Dance that mixed old school 80s metal riffs and powerhouse Bruce Dickinson like singing. After lead singer Lariyah Daniels decided to relocate cities in early 2014, Hessler recruited San Antonio, Texas based Jessikill to front the band but within five months of Ghost Dance‘s release, she had left the band. A month later, drummer Derek Spiteri and guitarist Frankie Spirada had also left the group. Hessler are reportedly continuing with guitarist Igz Kincaid having taken over lead vocal duties but we are now halfway into 2015 with no new band announcement.”

As it turns out, Kincaid and bassist turned guitarist Erik Michael were hard at work writing new songs in 2015 and apparently still in 2016 to follow up Ghost Dance. The duo have appeared onstage as Hessler in the Chicago, Illinois, USA area on a few occasions since August 20, 2015 with two unidentified persons handling the bass and drums.