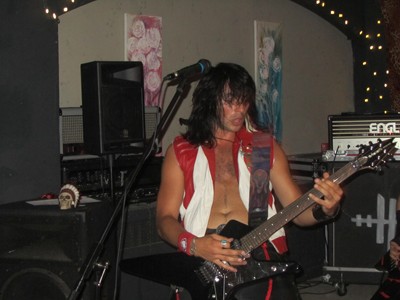 Hessler frontman Igz Kincaid not only plays sings and plays guitar but also models and appears in commercials from time to time. Kincaid is now part of a commercial (see below) for the marketing company Motion Source Creative who describes itself as: “We’re Motion Source Creative, a team of web designers, film makers, photographers and geeks. We make marketing easy…offering a variety of services.”

Back in February 2016, Kincaid took part in a commercial for retail giant Kmart.

In the last few years, Hessler featuring Kincaid and Erik Michael on guitar have released the EP Skeleton Crew and have released three videos for the songs “Killing Machine,” “Intruder” and “Akira.”

Speaking to Sleaze Roxx back in June 2018, Michael was asked when we can expect a new album from Hessler to which he replied: “When can be difficult to predict. As much as I’d like to do a full length album every year, it’s…. It’s a bit of a challenge. We’ve been finding that guerilla warfare has worked to our advantage lately, but that’s not to say a full assault isn’t coming your way. Just be ready when it happens.” Kincaid added: “We’d love to, but it takes time and lots of money to do it right. We’ve really been enjoying this single punches, and have more in reserve including some covers. There aren’t any definite plans but with the likely crappy winter we’ll have, it might be the perfect opportunity to assemble and organize, and put out a full length.”