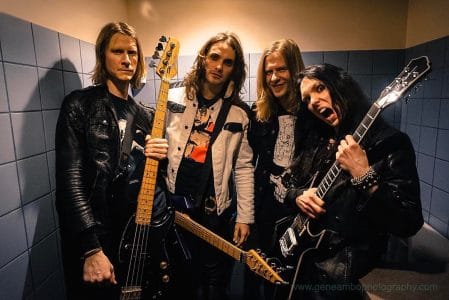 During that time, Hessler reinvented themselves with Michael switching from bass to guitar, and Kincaid taking on the lead vocal duties, which is something that he had been contemplating ever since starting the band. Two musicians have stepped up for the last two years to enable Kincaid and Michael to continue the Hessler juggernaut which includes playing live. Those two musicians have been brothers and The Last Vegas bandmates Nathan Arling (drums) and Adam Arling (bass).

“@hesslerofficial 2k17 @nathanarling & @adamjarling from @thelastvegas have been a professional godsend in helping us rebuild these past two years & get back in the sonic war. Every band wants to be successful from the get go, with the characters that comprise the spawn, and some lucky few succeed with the initial players and others go through 100s of changes. The longer you’re in the game, the more you realize that you truly have little control over where things go. The only thing you truly have control over is how much effort and heart you put in individually, and it feels good knowing you have pals to watch your back, guns blazing when you most need them. We don’t know how long the four of us will play together, but we’re enjoying it, and from the feedback we’ve been receiving, so are you. Onward and upward, no surrender. #hessler #skeletoncrew #heavymetal #pals #brothers #longhairs #fourhorsemen photo by @geneambophoto — with Adam Arling, the LAST VEGAS, Igor Galijasevic, Nathan Arling, Erik Michael and Gene Ambo Photography.”

Sleaze Roxx stated the following in its review of Skeleton Crew: “I readily admit that I was skeptical that Hessler could bounce back after losing three fifths of the band and especially their female powerhouse singer Jessikill, and even more skeptical once Kincaid announced that he would take over the lead vocals, but I should have known better. Kincaid and Michael have proven that there is more than a lot of fight in them and more importantly some great new music in them. I am now fully convinced that Hessler‘s best days are ahead of them and I simply can’t wait to see these guys play live once again and hopefully release more new music sooner rather than later. Long live Hessler!”