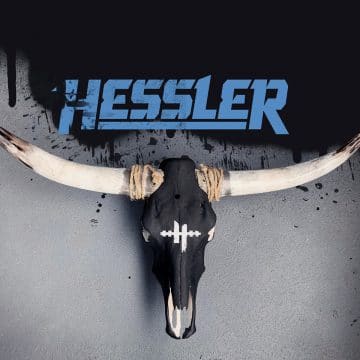 Speaking exclusively to Sleaze Roxx, Kincaid was asked what the new single “Crazy Horse” was about to which he replied: “I feel like that’s for the listener to decide. It leaves more for the imagination and is always interesting hearing different peoples’ perspective about what a song is about. What I can say is that the song riffs were actually written on an old acoustic guitar, a 1930s Regal that we had refurbished. The lyrics were written on a drive heading south [laughs].”

In terms of whether the single’s references to the Dynamite Kid, Kincaid advised: “I thought the Dynamite Kid is a cool reference for a legend that passed away, but it doesn’t necessarily mean that the song is about professional wrestling.  If WWE, AEW, or others need an entrance theme — you know where to find us.”

With respect to the timing for Hessler‘s new EP or album that would follow up 2017’s Skeleton Crew EP, Kincaid indicated: It’s been a slow burn, a controlled burn, but a slow one. We have eight songs fully completed and are in the process of finalizing the last two. We plan to release a vinyl LP in early 2020 — possibly as soon as January — and the goal is to have ten songs on it.”

Hessler date back to 2008 and band founder Kincaid was asked how he came up with the band name to which he cheekily replied: “How isn’t important…. Why is important; because Aqua, Backstreet Boys, 3 Doors Down and U2 were taken. Had to improvise.”