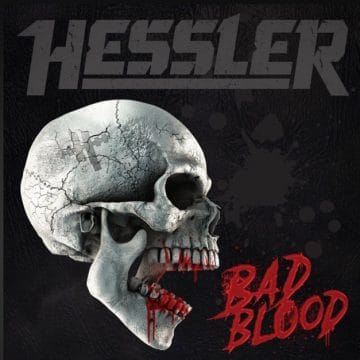 Hessler previously released the song “Bad Blood” with female singer Lariyah Daniels handling the lead vocals on their EP of the same name in 2011.

Sleaze Roxx stated the following in its review of Hessler‘s EP Bad Blood back in April 2011: “As I listen to Bad Blood, I think to myself, ‘damn, this sound was done to death almost 30 years ago!’ Yet it is the old-school sound and delivery of Hessler that keeps drawing me in, because even though the formula being used is decades old, there really aren’t many new bands taking this approach — or maybe it’s the seductive photos of Daniels on the group’s website that is clouding my judgment.”

Since that EP, Hessler have released three albums — the full-length album Comes With The Territory (2012) with Daniels on lead vocals, the EP Ghost Dance (2014) with Jessikill singing and Skeleton Crew (2016) with Kincaid at the helm in terms of vocals.

Would you like to know more? @ www.hesslerchicago.comSpotify @spotify:album:5K2WqdVmbkHyqUyBGr5PlFBad Blood – by HESSLERAs the clock ticks the time, I wonder…