Chicago based rockers Hessler have released their first video for the song “Killing Machine” in support of their new EP Skeleton Crew. 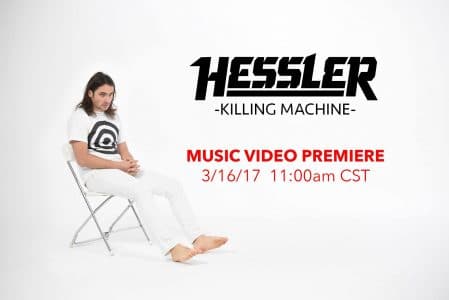 In an interview with Sleaze Roxx back in November 2016, Hessler founder, guitarist and now lead vocalist Igz Kincaid spoke about how Hessler‘s new material compares to the band’s prior songs: “I think it is more aggressive and more metal. Erik and I are definitely classic heavy metal fans. I think that in recent times, Frank [“Snakes” Spirada] had drifted away from that. Over the years, he and I differed on what we wanted to play as guitar players so we didn’t mesh as well when we were younger where Erik and I are like a ying and a yang. I think that I am a little bit more melodic and he’s a little bit heavier, which seems to be a good blend. I got into this because I wanted to play heavy metal. It’s my favorite… it’s what makes me happy and that is what I naturally put out of my body and the energy that I exude. Erik is the same way so the new songs are more aggressive with a little more bite. People have said that it’s a little thrashy. We’ll see where it goes. There’s nothing wrong with that. I don’t have the vocal style at all to play pretty ballads or poppy songs — not that I am knocking that. Like I said earlier, you have to play the cards that you are dealt and we look forward to being a son of the bitch aggressive raw nasty band!”

Sleaze Roxx stated the following in its review of Skeleton Closet and “Killing Machine”: “Skeleton Crew kicks off with the first single “Killing Machine” which starts with an old school thrash metal guitar riff right out of the ’80s. Undeniably, Hessler have decided to go in a heavier direction and in the process the music fits very nicely with Kincaid‘s vocal delivery, which is part screaming / part almost talking at times. “Killing Machine” never lets up starting fast off the gates and keeping the pedal to the metal. It’s just an enjoyable heavy metal track that will remind you of the glory days from the ’80s thrash scene.”