Chicago, Illinois, USA based rockers Hessler have released a video for their new song “Akira.” In terms of the Hessler band members, the video only features band founder, guitarist and now lead vocalist Igz Kincaidh along with former bassist and now guitarist Erik Michael.

The duo released the aptly named EP Skeleton Crew back in November 2016 and Sleaze Roxx provided from its point of view, the history of the band in its review of the EP: “If you don’t know the story, Hessler were on the verge of some big things with 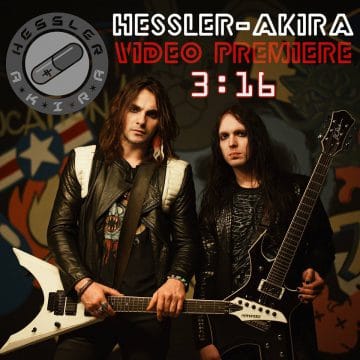 some reported interest from record labels including one major one after releasing their first two albums Bad Blood (2011) and Comes With The Territory(2012) with blonde bombshell Lariyah Daniels on lead vocals. That came crashing to a halt when Daniels decided to leave the band and relocate from Chicago, Illinois to Atlanta, Georgia in early 2014. Daniels went on to get married, start a family and go in a much darker direction as the singer of melodic occult metal band Khaotika. To capitalize on their many opportunities directly ahead of them, Hessler quickly recruited powerhouse female singer Jessikill who was supposed to relocate from San Antonio, Texas to Chicago, Illinois. That never happened and despite releasing a phenomenal EP entitled Ghost Dance in mid-2014 (that finished #3 on Sleaze Roxx’s Top Ten Albums of 2014), Jessikilleventually left the band in November 2014 to pursue love and stop commuting from Texas to Illinois. While that was not that surprising given that Jessikill had never made the permanent move to Chicago, what was surprising was the departure of long-time guitarist Frankie “Snakes” Sripada and drummer Derek Spiteri who presumably got discouraged with the turn of events. This only left two men standing in founder and guitarist Igz Kincaid along with bassist Erik Michael (the latter having played on the last two EPs). With only two band members left at the end of 2014, it became virtually impossible for Hessler to capitalize on the release of the very good documentary entitled The Last Kamikazis of Heavy Metal done by El Jinete Films about the band.

Determined not to experience the same issues once again, Kincaid decided to finally take the plunge on what he had contemplated doing since the get go, which is to take over the lead vocal duties. In doing so, Hessler were undergoing a major make-over going from a female voice to a male one, and from the female powerhouse Ronnie James Dio of the world (in Jessikill) to a largely untrained voice closer to a Blackie Lawless in terms of vocal capabilities and range. Can you even imagine having a band and going from Ronnie James Dio to Blackie Lawless in terms of singers? No offence to Mr. Lawless (as W.A.S.P. are one of my favorite bands) but he can’t hold a candle to Mr. Dio when it comes to singing. I will admit that my main concern going forward with Hessler was how the band would sound with Kincaid as the singer.  After all, Kincaid had some big shoes to fill singing wise having to follow Jessikill.”