Chicago, Illinois, USA based rockers Hessler have released a video for their song “Intruder” from their latest EP Skeleton Crew, which was released back in November 2016 and is the first featuring band founder and guitarist Igz Kincaid handling the lead vocals. 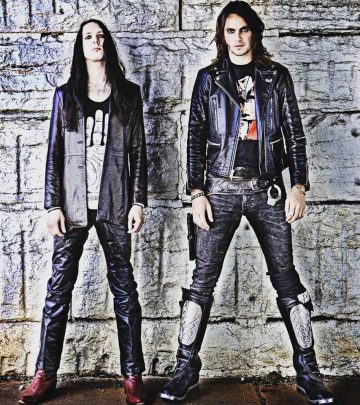 Sleaze Roxx stated the following in its review of Skeleton Crew: “I readily admit that I was skeptical that Hessler could bounce back after losing three fifths of the band and especially their female powerhouse singer Jessikill, and even more skeptical once Kincaid announced that he would take over the lead vocals, but I should have known better. Kincaid and Michael have proven that there is more than a lot of fight in them and more importantly some great new music in them. I am now fully convinced that Hessler‘s best days are ahead of them and I simply can’t wait to see these guys play live once again and hopefully release more new music sooner rather than later. Long live Hessler!”

Back in November 2016, Sleaze Roxx interviewed Kincaid and asked him to compare the older Hessler material to the new songs on Skeleton Crew. Kincaid stated: “I think it is more aggressive and more metal. Erik and I are definitely classic heavy metal fans. I think that in recent times, Frank [“Snakes” Spirada] had drifted away from that. Over the years, he and I differed on what we wanted to play as guitar players so we didn’t mesh as well when we were younger where Erik and I are like a ying and a yang. I think that I am a little bit more melodic and he’s a little bit heavier, which seems to be a good blend. I got into this because I wanted to play heavy metal. It’s my favorite… it’s what makes me happy and that is what I naturally put out of my body and the energy that I exude. Erik is the same way so the new songs are more aggressive with a little more bite. People have said that it’s a little thrashy. We’ll see where it goes. There’s nothing wrong with that. I don’t have the vocal style at all to play pretty ballads or poppy songs — not that I am knocking that. Like I said earlier, you have to play the cards that you are dealt and we look forward to being a son of the bitch aggressive raw nasty band!”

Would you like to know more? @ www.hesslerchicago.comSpotify @spotify:album:6qZXpfMpb9WFR5LW6BeU5mIntruder by HesslerSilently I’ve come alone, from beneath t…