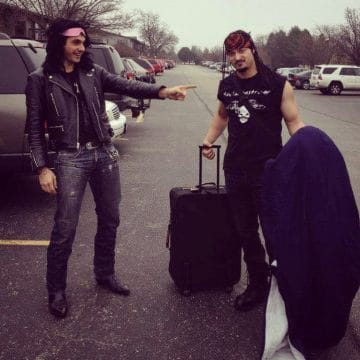 Chicago, Illinois, USA based rockers Hessler reunited for one show with former drummer Marcus Lee due to the band’s current touring drummer Richo Marquina having sustained a knee injury in a recent bike accident. Lee was in the Hessler line-up for the gig at RocHaus in West Dundee, Illinois, USA on July 19, 2018 while the group opened for Beasto Blanco.

The following message was posted in part on Hessler‘s Facebook page on July 19th:

“@elricho24 had a nasty bike accident, his knee is the size of a melon. He wanted to soldier through but so he doesn’t lose a leg, we called in an old gunslinger @marcuslee_official fresh home from tour with @katlofficial , to jump in hours before so we can play the show. Come out to @rochauswd in West Dundee to see us play with an old friend in support of @beastoblanco kicking off their Monstrous Things Tour”

“Got called yesterday to do this show tonight at the legit 11th hour. Filling in on drums for my old band @hesslerofficial at Rock Haus in West Dundee, IL! Show starts at 7:30pm! Let’s see if I can learn the set before that time!”

Lee played on Hessler‘s debut EP Bad Blood (2011) and debut full-length album Comes With The Territory (2012). Lee was also part of the band when El Jinete Films did a documentary about Hessler that was titled The Last Kamikazis Of Heavy Metal and released in 2014. In the documentary, Lee was seemingly the only band member willing to publicly criticize current Hessler frontman Igz Kincaid for his almost dictator ruling of the Hessler juggernaut. Lee is currently the drummer for Kobra And The Lotus.

Hessler‘s “Last Alive” video (with Marcus Lee in the line-up):

Would you like to know more? @ www.hesslerchicago.com Spotify: https://open.spotify.com/album/16Sf9GUCIPehAofCQsydb9?si=ZYTJr-OoQqmqj1w0RwA3nQHESSLER – Las…