It has been a long wait but Hessler are finally about to record their new album in June 2016. 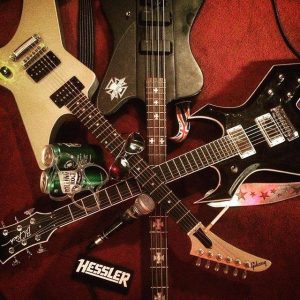 Back in October 2015, Sleaze Roxx reported the following:

Following the departure of [singer Lariyah] Daniels in January 2014 and [replacement singer] Jessikill in November 2014, Hessler decided to forge ahead with lead guitarist and band founder Igz Kincaid taking over lead vocals. On March 16, 2015, Kincaid posted the following on Hessler’s Facebook page: “Erik [Michael, guitar] and I decided that all of the successes and failures of the last four years have lead us to move forward as a four piece with myself on lead vocals. I’ve contemplated fronting the band from before the release of Bad Blood in 2011 and am proud to finally be able to vocalize my lyrics as they were intended. Erik and I have been writing new music consistently since November and looking for the proper rhythm section to join the crew…”