Chicago, Illinois, USA based rockers Hessler consisting of frontman Igz Kincaid, guitarist Erik Michael, bassist Adam Arling and drummer Richo Marquina have unveiled a video for their cover of the Misfits‘ track “London Dungeon” from their new studio album When The Sky Is Black. 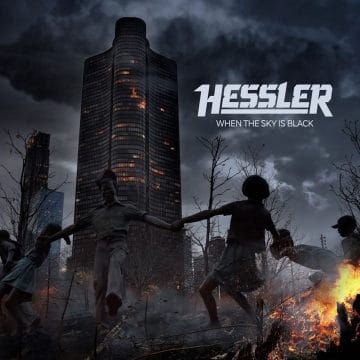 In an interview with Sleaze Roxx posted yesterday, Kincaid and Richard were each asked how come Hessler ended up having three covers on their new album. Richard replied: “They’re super fun to play! I love hearing covers from my favorite bands because you know they’re having fun too. “Twilight Zone” lends itself to being heavy. We both love Turbonegro, and after playing a Misfits set on Halloween, I became obsessed with them. Why not throw a song by them on the album?”

Kincaid added: “That is another thing that just happened by chance. Pick any band over time and we’ve covered a lot of different artists and a lot of different music. One of them that came from a pure place is that in the beginning, we always covered metal songs. When we put out ‘Twilight Zone” as a single, both Erik and I are fans of Golden Earring as a band and as players. In covering that, it was different. It wasn’t expected. The Misfits cover came about just last year for Halloween, we did a tribute show where we dress up as the Misfits and played. Aside from “Bullet” and “Vampira”, I was always familiar with the Misfits.

Growing up, every kid in school had a Misfits shirt but I think that one thing that turned me off from them — everybody wore it but me, for some reason, I was like “Aaaah, maybe this is not for me” because it was mass approved by the masses but boy, was I wrong! I’m a fan of Danzig but I never dug too dip in the Misfits and in us rehearsing for the show, playing the set we did, I got three weeks of weight lifting, running on the treadmill, singing and trying to get to my closest Danzig shape. Something about “London Dungeon” really captured me. I felt like the four of us — Adam, Richo, Erik and I — played, that song, there was something special. It just seemed like the right reason to cover it. But in putting three songs on the actual record, once again, that’s something that wasn’t planned. It kind of just happened that way because we have a lot more originals that are just sitting I guess for the next record. I don’t know. Just shooting from the hip on this one.”