Speaking exclusively to Sleaze Roxx, High Heeler explained why it took so long for them to release a full-length album: “High Heeler‘s art is like good wine — it needs time to develop and gets even better over the years. We didn’t start this band with a fixed idea of where we wanna take it. We just did what was enjoyable for us: jamming and playing live. Sometimes we rehearsed every week, sometimes once a month. We never went for “breakthrough tactics.” We never toured etc. Also, the times have changed completely. Back then when we started in 2000, there was no interest for classic heavy metal at all. There was no “underground movement” like these days. With the exception of some tiny flashlights, it was just dead. Even if we would have had the skills and the money for recording professionally back then, it would have been quite pointless, as there was no audience for it. Moving towards 2010, things changed. We had lots of material, Heavy metal was back again and so we released the 12 Inch Heels EP. People liked it and pushed us to finally record an album, so we took on the endeavour. Doing this album was quite a trip with many ups and downs. Again, we didn’t rush things and took our time until everybody in the band was satisfied with the result. And here it is!”

With respect to what people can expect on High Heeler‘s debut album Force And Finesse, the group stated: “It’s pure heavy metal, based on twin-guitar-riffs, with a powerful production that’s putting these riffs up front. It’s got well elaborated lyrics that live up to the music, well-crafted songs, and catchy hook lines. And it looks killer, as it features an oil painting by singer/bass player Poison Poser on the cover. What else would you wish for?” 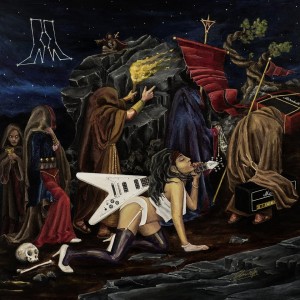