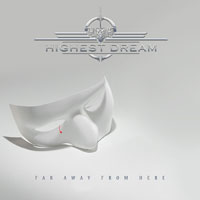 HIGHEST DREAM TO RELEASE ‘FAR AWAY FROM HERE’ IN MARCH:

Escape Music (www.escape-music.com) are pleased to announce of signing of Highest Dream. The band’s upcoming CD, ‘Far Away From Here’ is scheduled to be release on March 27th, 2009. Samples from the upcoming album can be heard at www.myspace.com/highestdreamrock.

Highest Dream are from Brazil and the band centres around Riq Ferris and Leo Mendes, two very talented people who have created a sound that has great influences of renowned bands such as Toto, Journey, Kansas, Trillion, Asia, Survivor, Van Halen, Queen, Europe, Whitesnake, Pride of Lions, Def Leppard, among many others of the genre. If you want to hear pure melodic rock that borders on pomp then look no further!

Keyboardist Leo Mendes made his first musical contact with the vocalist Riq Ferris in a work named “Hardhits”, a cover band playing hard rock and AOR songs. They recorded a demo CD, but the work didn’t continue and the band broke up in mid 2006. Before Highest Dream, Leo Mendes and Riq Ferris were part of many projects. Leo worked as keyboardist, producer, musical director, arranger and made several works with many artists. Also, he acted intensely in the musical theatre scene of Rio de Janeiro.

Riq sang in several rock bands and recorded several works, such as Sigma 5, Thotten, Snow, and as backing vocal of some artists such as Ted Poley, Joe Lynn Turner and Tony Martin.

In May 2008, Leo contacted Riq again and discussed their dreams. Both had several songs and ideas in their personal collections, and that was enough to start recording Highest Dream. All compositions and arrangements were made in a very spontaneous and genuine way, without the intention to create something biased. It was exactly the realization of all the musical influences that was within each of them.

The music on this debut CD is Melodic Rock and has all the hallmarks of the eighties style sound with great guitar playing (using three great guitarists of Rio de Janeiro: Marcelo Nami, John Cassio and Marcio Loureiro) and some fantastic parping keyboards, courtesy of Leo himself. The result is an astounding array of compositions that range from Asia-like keyboards to Journeyesque melodies with some Kansas overtones.

Truly this CD can be considered as a great achievement of talented musicians who were born with the true essence of rock in their veins.

‘Far Away From Here’ Track List:
Intro
Restless Dreamer
Can’t Fight Hearts
Helpin’ Hand
Far Away From Here
All I Want
Reach Higher
Love Makes You Cry
I Will Find You
Not An Angel
Never Be Apart