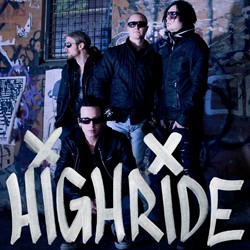 Highride is no doubt one of Sweden’s most promising rock acts of today. The band was founded in 2006 by Peter Waljus (vocals and guitar), Andreas Falk (bass) and Nicke Rosell (drums) and started playing live in the summer of 2008. In 2009 lead guitarist Ted Philip joined the band, and the line-up was complete.

Their music is best to be described as “rock ‘n’ roll with a punk attitude” and they have gained quite a big fanbase just by proving themselves being a great live band. In 2011 they became Stockholm Winners of the band contest Emergenza Festival, pulling by far the biggest crowd of all bands competing.

Highride have released their official debut single “Song Of Your Decay” on all digital platforms in July 2012, and the band are currently in Sunlight Studio in Stockholm with producer Tomas Skogsberg working on the last bits of their debut album.