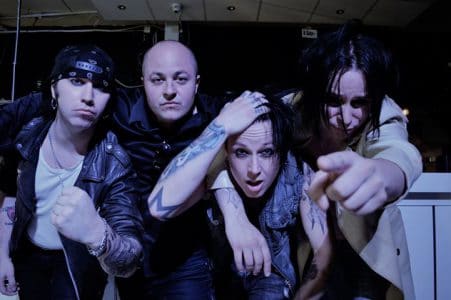 The group was one of the two official support bands (along with The Cruel Intentions) on Crashdïet‘s Idiots On Tour throughout Europe back in the fall of 2019. Speaking exclusively to Sleaze Roxx, Waljus stated the following about that tour: “The European tour with Crashdïet and The Cruel Intentions was a total blast. Super intense with three awesome bands and a total of 18 people living basically on top of each other in a nightliner bus for almost two weeks. All full blown pros, but hardcore party people too, and I really love that combination. All venues were great, fans were fantastic and we were really satisfied with all the shows. We had the time of our lives, so now we can’t wait for the corona pandemic to calm down so we can release our new album Excellence & Decadence and start booking tours and come out and play again.”

In terms of Highride‘s upcoming new album, Waljus indicated: “Excellence & Decadence is the first full album I’ve ever produced myself, with a lot of views taken in consideration from the rest of the band of course. Writing and recording the album has been quite a long process, mainly since I first thought I’d do the mixing too, but that was driving me nuts when I consistently went back and wanted to go back and implement all the new producer tricks I learned along the way to songs that was supposed to be done. So Svein Jensen at Grand Recordings in Gothenburg took over the task did an amazing job! I’ve done the main songwriting on nine out of ten songs, but it would never sound anything the same if it didn’t go through the Highride machine with all four doing their thing, putting their effort into both the songwriting and recording. Mille has written some lyrics and really fantastic lead guitar stuff I could never think of. He really brings something special to the table. And there’s one song called “Sweet Driver” written by Svein Jensen. A previously unreleased song he had laying around that he gave to us, so we made it ours. It’s a fast roaring V8 rock n’ roller and the first time I share the lead vocals with Mille.

“Superstarblind” is the fourth and last single from the upcoming album. A real sleaze party anthem we’re super satisfied with! We now have an album that’s a total killer, all mixed, mastered and ready to be released. We have been talking to a few labels, but have no deal signed. For us, it’s all about getting the right distribution and marketing. If the right A&R doesn’t stop us, we’ll just stick with the plan and release it ourselves as soon as we start to see an end to this global pandemic named after a light beer.”

With respect to the album name Excellence & Decadence, Waljus stated: “The name of the album is a heaven n’ hell kind of thing I came up with since my lyrics tend to either be about partying and not caring about anything other than having fun, or simply the total opposite and putting words on your darkest feelings about the world falling to pieces. However, if the whole world is burning and we’re all gonna die, let’s do it with one last party!”

You can check out more about Highride via their website.