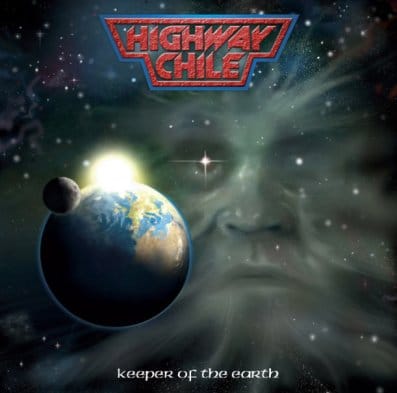 Because of an accelerated release for the European market (the US will follow later this year) Highway Chile’s brand new album ‘Keeper Of The Earth’ can be ordered directly from Mausoleum Records!

Be one of the first people to get your copy of this instant classic-heavy rock album that will expand the legacy of Highway Chile.

Highway Chile operated between 1980 – 1985 and released several popular records such as Storybook Heroes (1983) and Fever (1984). In those years they toured a lot and they shared the stage with big acts like Motorhead, Whitesnake, Michael Schenker, Accept and Y&T. One of the closest fans of Highway Chile was Alfred Lagarde (Rock In Peace bro…), a famous DJ, who also produced the record Storybook Heroes. Highway Chile was, together with Picture, Helloise, Bodine, Vengeance and Vandenberg, one of the top acts of the Dutch national heavy rock scene in the eighties.

In 1984 the original Highway Chile line-up split up. Jan Koster and Eric Karreman continued Highway Chile (to form some years later the stunning well known Sleaze rock act Sleeze Beez). Ernst van Ee and Ben Blaauw formed the succesfull formula Helloise. Highway Chile held on for one year with some new members but became too much AOR oriented for the orginal fans. Helloise, as we know now, became famous for several years but split up in 1989 (in 1996 they, however, reunited again and made and are still making (!!) great music).

In 2002 the band toured all over Holland again and made a live-recording that is now for sale with the appropriate title “On The Road Again”. On this CD you can hear the voice of Robert Soeterboek and the guitar sound of Attila Szabo (both replaced in 2003). The reactions on this tour were so overwhelming that the band decided to go on and to work on new songs.

The material Highway Chile performs on stage covers a lot of songs from the most succesfull period, meaning of course songs from Storybook Heroes. Songs like Highway Chile is coming to get ya, Headbangers, Jesse James and Carol… They are played with an energy as if they were written today. The setlist also contains songs from Helloise and they also play coversongs from Y&T and Whitesnake. And of course they play the new material!

At the moment the band has completed a brand new studio album called “Keeper of the Earth” (first studio album since the 80’s). This album can be referred to as the legitimate successor of STORYBOOK HEROES and will be released through MAUSOLEUM Records!

You can now order KEEPER OF THE EARTH directly from Mausoleum Records because of an accelerated release for the European market! The US will follow later in 2008!