Almost two years after releasing their debut self-titled album which was 24 year after first forming, Pennsylvania, USA rockers HitnRun have announced that they are recording new music and to commemorate this event, they are making their song “Shot Of Love” available as a free download. 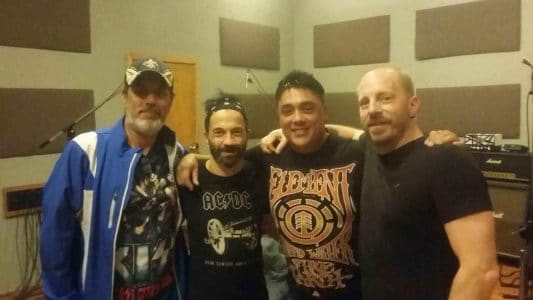 “To mark their return to the studio to record new music for the first time in more than 20 years, Pennsylvania hard rockers HitnRun are offering a free download of the track “Shot of Love” from their self-titled debut for a limited time via Amazon Music and CD Baby.“It all comes down to wanting more people to hear the band, especially now that we’ve made the decision to carry on and record new music. For fans of bluesy, melodic hard rock, we feel that HitnRun has a lot to offer,” singer Eric Montoya explains.

Originally formed in 1991, HitnRun gigged extensively throughout Pennsylvania and New Jersey before disbanding in 1995. With renewed interest in the band thanks to social media, the group finally released their self-titled debut album digitally at the end of 2015. The album met with great critical acclaim throughout the online hard rock community, including excellent reviews from MelodicRock.it, Sleaze Roxx, and Metalglory.de. HitnRun then signed with Denmark-based Lions Pride Music for the 2016 European release of the physical CD of the album.

Jareth Grealish, the band’s founder and lead guitarist, elaborated on the fan reaction to HitnRun’s debut, “It’s been amazing. Having our music finally recognized by rock fans around the world… it’s inspired us to create new music. Our label overseas has essentially sold out of our CD, so we know there’s a larger market for us to reach. By offering a free song to melodic hard rock fans everywhere we’re hoping to grow our following while we work on our next record.”

For the past several months, Grealish and Montoya have been writing new material for HitnRun’s follow-up release. The band returned to the studio this month to begin tracking new songs with the help of drummer Johnny Dee (Britney Fox, Doro). Montoya describes the new music as “classic HitnRun, but a bit bolder and more mature than the first record.”

To get your free download of HitnRun’s “Shot of Love” visit: CD Baby or Amazon.”