Lions Pride Music has announced that it has signed the early ’90s era group HitnRun and will be releasing the group’s long awaited debut album on a worldwide basis.

Twenty four years after first forming, HitnRun released their debut self-titled album on December 11, 2015 but only on a digital basis.

Sleaze Roxx stated the following in its review of HitnRun: “HitnRun put the emphasis on melody as the songs on their debut album seem to sometimes have the brakes placed on them in terms of pace in favour of slower bluesy and melodic rock. All of the songs on HitnRun‘s self-titled debut album are good ones although there is nothing that really jumps out at me as a really memorable tune. I could certainly picture hearing some of the songs from this album such as “Shot Of Love” and “King Of The Fools” on a classic rock radio of some kind. If you’re looking for some quality songs that have that classic rock feel with some ’80s hair metal traces, look no further than HitnRun. I am glad that HitnRun finally released their debut album since it is clear from listening to their songs that it would have been a real shame if these songs remained buried any longer.” 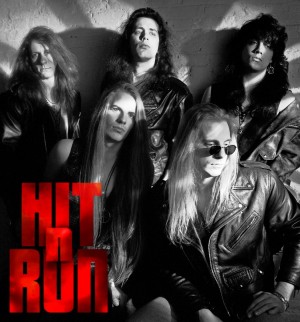 “Lions Pride Music is delighted to announce the signing of the American hard rockers HitnRun, for the release of their debut album worldwide. The band’s sound could best be described as a cross over between Jailhouse and early Danger Danger. HitnRun are for sure to bring back the good old hair rock sound, with their debut album.

Hailing from Northeastern Pennsylvania, HitnRun was originally formed in 1989 as a hard rock cover band that eventually began featuring several original songs in its set list. After a brief hiatus in 1990, founding members Mark Sutorka (guitar) and brothers Jareth and Beckett Grealish (guitar and drums respectively) set out to rebuild the group with new bassist Dan Whitman and forge ahead as an all original hard rock band. An exhaustive search for a new lead singer finally led them to soulful vocalist Eric Montoya, and the band line-up was solidified. Writing soon commenced on a set of all original material that drew upon the band’s pool of bluesy yet commercial hard rock influences. 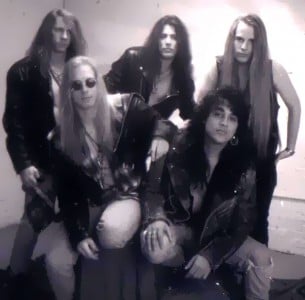 A revitalized HitnRun took the scene by storm in December 1991, quickly building a dedicated following in the Scranton/Wilkes-Barre area, a true accomplishment considering the region was practically devoid of original rock at the time. With a combination of killer songs, memorable live performances and relentless promotional efforts, the band helped to establish original rock in Northeastern PA, packing area clubs without including a single cover song in their sets.

Unsatisfied with just regional success, HitnRun broke into the Philadelphia/New Jersey scene, playing shows at such notable venues as the Cellblock in suburban Philly, Obsessions in Central NJ, and Bonnie’s Roxx in Southern NJ. As their following grew, so did opportunities to reach larger audiences playing with national acts including Dirty Looks, Tyketto, and Widowmaker (featuring Dee Snider of Twisted Sister).

Throughout their four-year history together, the band entered the studio on three separate occasions to record their original songs in the hopes of attracting a major record label. Unfortunately, a recording contract proved all too elusive, as the music scene of the early ’90s was overtaken by alternative and grunge rock. Struggling to survive in this new musical climate eventually took its toll on the group, and in 1995, they officially disbanded.

HitnRun‘s story didn’t end there, however. In 2008 after launching a MySpace page featuring some of their songs, several independent hard rock labels expressed interest in releasing the band’s music. This led to HitnRun regrouping in the studio to complete three unfinished songs they had begun to record back in 1994. Now thanks to Lions Pride Music, HitnRun will be releasing their first CD in 2016, featuring recordings that span their very first demo sessions to their independently released 1993 EP to the lost tracks that were finally completed in 2009. The band is thrilled to finally have an opportunity to share its music with rock-n-roll fans all over the world through Lions Pride Music.”