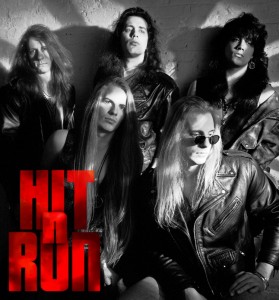 “In 1991, HitnRun stormed the music scene of Eastern Pennsylvania and New Jersey, bringing their brand of original commercial hard rock to the masses. Now after unlocking the vaults and putting the finishing touches on their lifelong recordings, the band will release their debut album to rockers around the world.

“It’s taken a lot of hard work and patience to get to this point, but we’re really proud of this record and can’t wait for rock fans to hear it,” says HitnRun guitarist Jareth Grealish. “This album really captures our sound from the early 90s—bluesy, melodic, soulful and rocking,” he continues.

Hard work and patience have been a part of HitnRun’s musical ethic from the start. According to drummer Beckett Grealish, “Back in 1991, we were told that there was no way we could play original rock in the Scranton PA area and draw a crowd, but we proved the naysayers wrong.” With hard rocking, hook-laden songs and electrifying live performances, HitnRun quickly developed a large and dedicated following in a music scene typically dominated by cover bands.

“We focused on writing great songs and rehearsing constantly to make sure we delivered the goods every time we played live,” singer Eric Montoya proudly recalls. Together with guitarist Mark Sutorka and bassist Dan Whitman, Montoya and the Grealish brothers eventually broke into the Philadelphia music scene, opening for national recording acts Dirty Looks, Tyketto, and Widowmaker (featuring Dee Snider of Twisted Sister). Today, all of the band members remain friends and stay in touch.