Twenty four years after first forming, HitnRun released their debut self-titled album on December 11, 2015 but it was only on a digital basis. HitnRun‘s debut album will now be released on CD via Lions Pride Music on July 21, 2016. 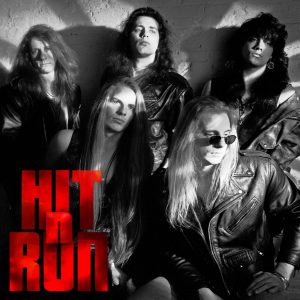 “Long before Halestorm and Breaking Benjamin climbed their way out of the Pennsylvania music scene to the top of the rock world, there was HitnRun, an all-original band formed in 1991 that brought their infectious brand of bluesy, commercial hard rock to a music scene dominated by cover bands.

Now, 25 years after the band’s inception, their self-titled debut album will be released on physical CD throughout Europe via Lions Pride Music, a Denmark-based label specializing in hard rock and melodic heavy metal. “To say it’s been a long time coming is a bit of an understatement,” says HitnRun guitarist Jareth Grealish. “We always felt that we had what it took to be a major label artist, but we entered the music scene at a difficult time for bands in our genre,” he elaborated. Indeed, the rock scene of the early to mid 90s was shifting from “hair metal” arena acts to alternative “grunge” rock.

Despite the tumultuous musical climate, the band managed to develop a dedicated following and expanded their base outside of northeastern PA into Philadelphia and New Jersey clubs. “We got to play with some great major label acts like Tyketto and Dirty Looks. Despite the struggles, we believed in our music and worked hard to build our following and earn the respect of these artists we looked up to,” singer Eric Montoya recalled.

The album drops July 21st and features nine hard rocking tracks including the anthemic Shot of Love, which has begun getting airplay across the Atlantic. According to Grealish, “The album really captures our sound—bluesy, groove-laden songs with big riffs, soulful vocals and catchy hooks. We’re really thrilled that Lions Pride Music has given us this opportunity to bring our music to rock fans around the world.”

Inspired by the recent interest in the band, Montoya and Grealish have begun writing new material they hope to release next year. In the meantime, HitnRun will be available on CD in North America via NEH Records (www.nehrecords.com) and in digital format on iTunes, Amazon.com, Google Play, and other digital music services.”

Sleaze Roxx stated the following in its review of HitnRun‘s debut self-titled album: “If you’re looking for some quality songs that have that classic rock feel with some ’80s hair metal traces, look no further than HitnRun. I am glad that HitnRun finally released their debut album since it is clear from listening to their songs that it would have been a real shame if these songs remained buried any longer.”

HitnRun playing “Got The Fire” live at Bonnies Roxx in 1993:

Here we are IN 93′ at BONNIE’S ROXX in rural Atco NJ playing “GOT THE FIRE”!As always you can download and stream our album from just about anywhere on the n…