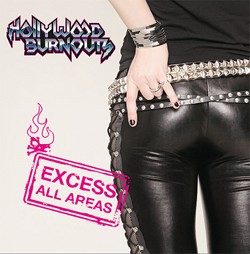 Founded in 2008, Hollywood Burnouts accomplished what many other bands could only dream of. They played national and international shows with bands like Cinderella, Bonfire, Hardcore Superstar, Crashdiet, Dokken, Stage Dolls and many others. Hollywood Burnouts stand for melodic hard rock that is influenced by glam/sleaze and even blues and heavy metal.

The band consists of Mike (vocals and lead/rhythm guitar), Chrizzy (rhythm/lead guitar and vocals), Nikki (drums and vocals) und Vito (bass and vocals) — four professional musicians who act on a very high level and have attracted an ever-increasing national and international fanbase.

After releasing a demo in 2009 and a self-titled EP in 2010 that were highly acclaimed by critics all over the world and almost sold-out after a few weeks, the band is going to release their first full-length studio album ‘Excess All Areas’ on March 9th. More information can be found at www.hollywood-burnouts.com and www.facebook.com/Hollywood.Burnouts.

Hollywood Burnouts continue their established mixture of heavy and to-the point-guitar riffs with a chorus that could become a potential hit, and aren’t considered Germany’s best and most successful new hard/glam/sleaze band for nothing.