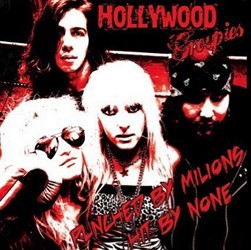 Not for the faint of heart, female fronted Hollywood Groupies arrive on the Glam and Sleaze scene delivering a sucker punch with their debut album ‘Punched By Millions Hit By None’. Foxy and the group deliver blow after blow with 9 ferocious tracks that will let you know they aren’t messing around.

Check out the melodic sleaze rocking hits “Swallow This” and “Thru The Fire” to be transcended back into the late 80’s and early 90’s when Lita Ford was crowned the Glam and Sleaze Queen!If you like your music with tons of spunk and attitude, pick up a copy of this impressive debut and crank the knob off your stereo!! Also recommended for fans of Smashed Gladys!

Get your copy, and listen to mp3 samples, exclusively at demondollrecords.com/Hollywood_Groupies_-_Punched_By_Millions_Hit_By_None.html.