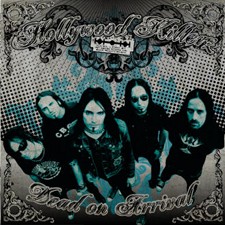 HOLLYWOOD KILLERZ have inked a deal with logic(il)logic for the release of their much anticipated new album, “Dead On Arrival”.

Harry, lead singer of the band, commented: “Dead on Arrival is a major step in the history of this band, it really represents ourselves and what we’ve been through to become what we are today. It contains some Hollywood Killerz classic tunes like “Grey Celebrations” or “Lovecrash” as well as new songs written exclusively for this album. It’s a decadent glampunk cocktail, often angry, sometimes intimate and sometimes cheerful. In conclusion it’s the perfect soundtrack for a quiet weekend of disorder”

The 13-track CD will be released on December 11 and the tracklist is as follows:

700.000
Grey Celebrations
Luxury Depression
Girls ® Dead
How (Could I)
Going Down
Somewhere Out Of This Mind
All Tomorrow’s Parties
Over And Over
Through The Sand
Our Memories May Be Right
Lovecrash
More Than It Hurts You

The release party will take place in Turin, the band’s hometown, at the United Club, with Superhorrorfuck as special guest