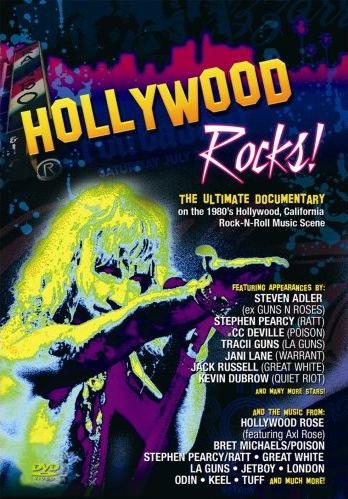 Based on the best-selling coffee table book of the same name, Hollywood Rocks! (being released worldwide by Cleopatra Records) is a 90-minute documentary film containing music snippets, music video clips, live concert footage, rare photos and interviews with some of the most notable metal/hard rock recording artists who made their mark during the 1980s and early 1990s Hollywood, California hard rock/hair metal music scene.

In Hollywood Rocks! the artists give their take on their most memorable moments (both the good and the bad) in this once-in-a lifetime musical era characterized by “big hair”, loud clothing styles, excessive partying and an underground method of street promotion simply know as “flyering.” And of course, what hard rock documentary would be complete without the inclusion of at least one of the more famous female fans who flocked to this southern California city to cheer on their heroes of this genre?

Interview segments with some of the current and former stars are broken up with exclusive, rare cutaway still photos of the artist from their heyday, music video clips by the artist and an occasional live concert clip from the period from which this film is based. Also interviewed for their historical perspectives are Cleopatra Records founder and President Brian Perera and former A&R guru Vicki Hamilton who describe in some detail the colorful business environment of this era. A stellar music background of nothing but the “hits” and musical rarities cement this film as a one-of-a-kind “must have” piece for collectors and fans worldwide.