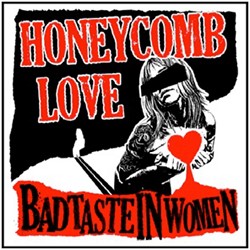 Honeycomb Love Developing A “Bad Taste In Women” In March

Honeycomb Love are returning to stamp their name all over dirty punk rock ‘n’ roll with the brand new single “Bad Taste In Women”. The band recently told SleazeRoxx.com, “After a lot of crap we’re back now with a new drummer! We have an album full of new tracks but decided to release single after single with a video for each.”

A UK band renowned for their ferocious live show, “Bad Taste In Women” oozes with the excitement and energy of this rotten but canny three-piece consisting of Ollie Lewis (bass and vocals), Matt Hipkiss (guitars) and Shaun Marsh (drums). A street punk vocal assault, with face-tearing guitars and floor shattering drum hooks, brings a fresh and confident sound that will shake up the ears of any who dares to let it.

Honeycomb Love’s debut music video will accompany the release of “Bad Taste In Women” March 11th, offering plenty of opportunity to show music fans why this brazen trio is definitely one to watch. The new single “Bad Taste In Women”, the follow-up to 2009’s ‘HCL Style’ EP, will be available for download worldwide on iTunes, Amazon, Napster, and Big Cartel on the same date.

For more information on Honeycomb Love and a list of upcoming tour dates visit www.honeycomblove.com and www.facebook.com/honeycomblove.