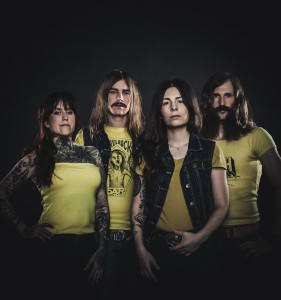 Swedish rockers, Honeymoon Disease, have released a lyric video for their song “Gotta Move” from their forthcoming debut album The Transcendence, which will be released worldwide on November 20, 2015 via Napalm Records.

“After their heavy hitting debut single “Fast Love” (2014), the weighted question remains as to whether Honeymoon Disease can deliver the same quality on a full-length debut. And the answer is YES! The Transcendence is an album full of future classics steeped in timeless charm, blessed with massive grooves, spirited with cocky howls, and seasoned with classic style riffs.”