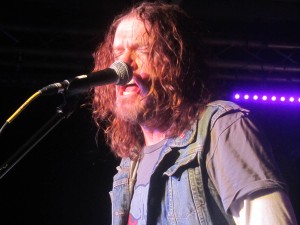 “On a serious note –
We have been getting a lot pretty shitty and mean messages, posts and comments with regard to the LA Lakers Basketball player who had an incident at a Nevada Brothel – HOOKERS & BLOW (the band) is nothing more than a tounge in cheek fun party, which in no way promotes excessive drug use or prostitution … Our thoughts and prayers are with All who were/are involved – please respect that –
Thank you.
Best,
HN’B 2015″

The group Hookers & Blow is the brainchild of Guns N’ Roses keyboardist Dizzy Reed and Quiet Riot guitarist Alex Grossi, which plays a set comprised mainly of Guns N’ Roses classics. Sleaze Roxx caught Hookers & Blow‘s show at the Rockpile in Toronto, Ontario, Canada back on January 10, 2015 and stated in its review: “The one great thing about Hookers & Blow is that you get to enjoy some obscure Guns N’ Roses tunes that you probably wouldn’t hear if you were seeing that legendary band live. Songs such as “Pretty Tied Up”, “Dust ‘N’ Bones” and “Bad Obsession” usually don’t make their way onto Guns N’ Roses‘ setlist these days. After opening with the classic track “Pretty Tied Up”, Hookers & Blow really got the crowd going with a rousing rendition of “It’s So Easy”. Shortly after, Reed apologized to the audience for his voice — although I’m not sure why, since there was really no reason to apologize and I don’t think anyone was expecting him to sound like the distinctive Axl Rose (which would be tough to do).”

Hookers & Blow are not the first hard rock / heavy metal group to get blamed for an unrelated incident and/or tragedy.

In 1984, John McCollum who was 19 years old at the time, committed suicide in his bedroom. Even though it was determined that his gun shot wound was self-inflicted, McCollum‘s family didn’t feel the 19 year old was solely at fault since it was discovered that McCollum had been listening at the time of his death to Ozzy Osbourne‘s song “Suicide Solution” from the singer’s debut solo album Blizzard of Ozz. McCollum‘s family filed a lawsuit against Osbourne and his record company claiming “Suicide Solution” had hidden lyrics that encouraged the suicide. Osbourne denied these allegations and stated that the song was actually an anti-suicide track. The case went on for several years and by 1988, a judge dismissed the lawsuit against Osbourne.

In 1990, Judas Priest were sued by the family of James Vance, who had shot himself in a suicide pact with a friend after reportedly drinking, smoking pot and listening to the heavy metal band all day. The Vance family claimed the boys had been driven by “subliminal messages” in Judas Priest‘s music. Even though James Vance had a long history of trouble with anger issues, his parents and extensive drug use, a judge allowed the case to to trial, where it was later dismissed.