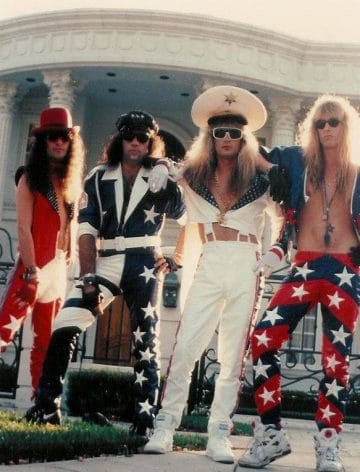 California rockers Hooligan Stew‘s original band members are reportedly rehearsing together for what can only be deemed a comeback return.

“Just want to let everybody know that hooligan stew is back in the studio rehearsing with all four original members. Vinnie Vegas, Bobby Brooklyn, Matt America, and the mighty Perris, on drums. Stay tuned for upcoming show dates”

“Hooligan Stew were headliners on the Sunset Strip back in the 80s and 90s. Pretty typical glam, but a lot of fun anyway. The guitar work is just awesome and it’s a shame these guys weren’t recognized more, all insisting they were the real deal and deserved way more success. Musically, they fit squarely with bands like Saigon Saloon, Walk the Chalk, Hanky Panky and X-Piracy.”

Hooligan Stew were headliners on the Sunset Strip back in the 80’s & 90’s. Pretty Poison is such a great sleaze song and one that I love very much!!