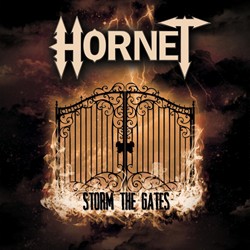 London hard rock band Hornet are due to release their single “Storm The Gates” on October 25th with a launch party event at The Intrepid Fox, London, in associated with SED Records.

The single, from their debut album ‘Skies Are Falling’, comes with a previously unreleased track called “Outta Control”. After originally saying they didn’t wish to release their debut album on iTunes, Hornet have announced that “Storm the Gates” will be released exclusively on iTunes on Monday October 28th, including the B-side.

In a recent Sleaze Roxx interview Hornet bassist Max Thompson said ‘Storm The Gates’ is “a great record from start to finish. Music should be like sex, get to the climax and you want more. That’s what our album is all about!” Bassist Tollef Rikje-Pearson continued, “we play what is real to us, right now in our lives. We aimed to sound like an original modern band and we do. Some people go on about the ’70s, ’80s and ’90s, sure that’s great, stuff that influences us is from those times, but it’s 2013 you know? We’re the future, not the past.”

After a successful Pledge Music project Hornet recorded their skull-stomping debut album ‘Skies Are Falling’ with producer/engineer Phil Kinman. Now with one of the most exciting albums in recent times, their tremendous energy and heart-pounding, raucous show like no other, Hornet plan to take the world by storm, one step at a time to become established as a powerful rock entity that is here to stay.